Interviews with
HIROSHIMA memory keepers Pass down a storyVol. 7 2016.6.17 up

I want to tell people that using nuclear weapons only ends up in a cruel disaster like the one I experienced. 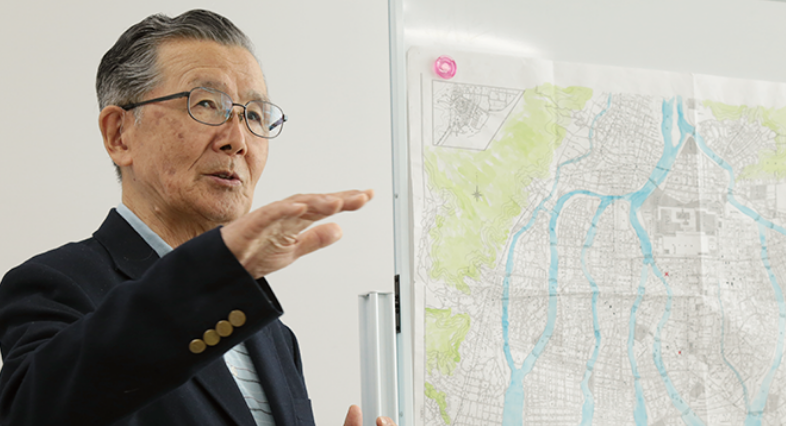 There are people who have committed themselves to passing down their A-bomb experiences to succeeding generations. What do they think of and try to share?
Mr. Sato was exposed to the A-bombing 1km away from the hypocenter. He is 85 and lives in Kanagawa Prefecture. We ask him what happened to him on August 6 and what he thinks now.

Tell us how old you were when you were exposed to the A-bombing.

Tell me what happened to you on August 6.

I was a student of a special science class of the Hiroshima Higher Normal School-affiliated Middle School then. Let me tell you what a special class was. Most of the middle school students those days were supposed to be mobilized to factories. But the government decided to have some educated students left when the war was over. So, special classes were set up in January, 1945. The students of those classes didn’t need to go to factories.

My brother, who was two years younger and was also a student of the special class, and I were evacuated to Tojo, in the north of Hiroshima Prefecture. Since there was a severe food shortage, catching anything around us to eat became our daily necessity. It was natural that the weak first suffered from a bad condition. My brother was one of them. Our teacher told me to take him back home to Hiroshima City with me. We came back to our home on August 4, two days before the A-bombing. Our home was located 1km from the hypocenter.

All through the night of August 5, air-raid alerts were continuously issued because of an air-raid somewhere around the Seto Inland Sea. We were awake throughout the night to extinguish fires in case we were firebombed.

On the morning of August 6, my father left early for a business trip to Shikoku. My mother, my brother, my youngest sister and I were at home. I had three sisters, but two of them had been evacuated to Shobara, in the north of Hiroshima Prefecture. My brother and I were sleepy because of the air-raid alerts during the night and went back to bed after my father left. My mother was doing laundry in the yard and my five-year-old sister was around her.

I think I was woken up by the shock of the A-bombing. I crawled out of the debris of the house and looked around. As far as I could see, all the houses had collapsed. I knew something terrible had happened. We were in danger from a fire approaching two to three hundred meters away from us. I pulled my mother, brother and sister out of the debris, and we fled to an open space nearby. Heated winds from the fire attacked us. To avoid the heat, I soaked myself up to my head repeatedly in a fire cistern. The concrete cistern was about one meter high. Since pesticide had been added to keep mosquito larva from breaking out in the cistern, I spat it out whenever I had water in my mouth.

In the late evening, the fires almost died out. We didn’t know where to go and were walking to find a place with no fire. On the way, I saw an aluminum lunch box in a clay pipe. In the box was charred black rice. I peeled off the surface, and then white rice appeared. My brother and I devoured it because we hadn’t eaten anything from that morning.

We were picked up by a military truck at that place. There were a lot of people including children on the truck, whose skin was peeling down. The truck was heading for a military facility. On the way, I looked back at the area where I lived. It was red all over. Seeing that, I was wondering what we should do.
In the facility, I saw a mother hold her dead baby tightly and a young man, all of whose skin was burned, have maggots come out.

After returning from Shikoku and looking for us, my father found us several days later. When he saw the melted bottle we used for keeping rice at the burnt-out site where our kitchen used to be, he thought that all of us must have died.
We were very happy with this miraculous reunion, crying a lot.

About the days after the war

After August 15, the day the war ended, we stayed at an acquaintance of my father’s. We were able to sleep on futon, Japanese style bedding, for the first time in days. However, my relief didn’t last long. One morning, I found a lot of hair on the pillow. My hair started falling out whenever I scratched my head. Then, finally, I lost most of my hair. My mother had the same symptom. After several months, my hair came back again, but it was thin, I remember. I guess that was due to weak cells or radiation.

In late August, we moved to Shobara where two of my sisters had been evacuated. Finally all of our family members were able to live together. But my mother, brother, sister and I had high fevers and were hospitalized. One month after the A-bombing, my mother died. Not knowing what was going on, the rest of us continued to have blood transfusions, donated by people in good health. In spite of the efforts, my youngest sister died the following March.
My father remarried and I had a new mother. Later we moved to Odawara.

Mr. Sato, you received the Atomic Bomb Survivor Health Handbook outside Hiroshima Prefecture, right? I hear that there were some survivors who on purpose to avoid discrimination, didn’t apply for the handbook in Hiroshima.

Yes, there were. There were some cases that, once their names came to light as survivors, it became difficult for them to find a job or to get married. However, I didn’t care about it. I was given the handbook in Osaka after the Atomic Bomb Survivors' Support Law passed in 1957.
I also had experiences of discrimination as an A-bomb survivor. When I was in Shobara, I wore a cap to hide my bald hair. I was very sad when a child of my age threw a stone at me when I was walking and called me “Pika-don.”
The Health, Labor and Welfare Ministry has provided a variety of benefits and educational programs to support survivors in a standardized way for each prefecture. However, each prefecture has its own way of practicing the regulations.

What he wants to convey now

I hear that you have been working as the chairman of the Kanagawa A-bomb Survivors’ Association and have made speeches overseas as well. How did the listeners respond?

I first went to Vancouver, and have also been to the U.S., Belgium, the U.K., Saudi Arabia and so on. All of the audiences including people in the U.S., gave me a big applause.

As the conclusion of this interview, can you tell me what the most important message you want to convey is?

I want to tell people that using nuclear weapons only ends up in a cruel disaster like the one I experienced. Whenever I tell my story at elementary schools, I ask children to tell what they have heard to their parents, their friends and their relatives. My story might be forgotten in a few years. But I hope even only a few of them keep what I say in their minds. I consider working for the abolition of nuclear weapons as my mission. I would like to continue this work as long as my physical health allows.