Interviews with
HIROSHIMA memory keepers Pass down a storyVol. 6 2016.6.16 up

I had thought that I was not qualified to tell my experiences because I felt guilty. 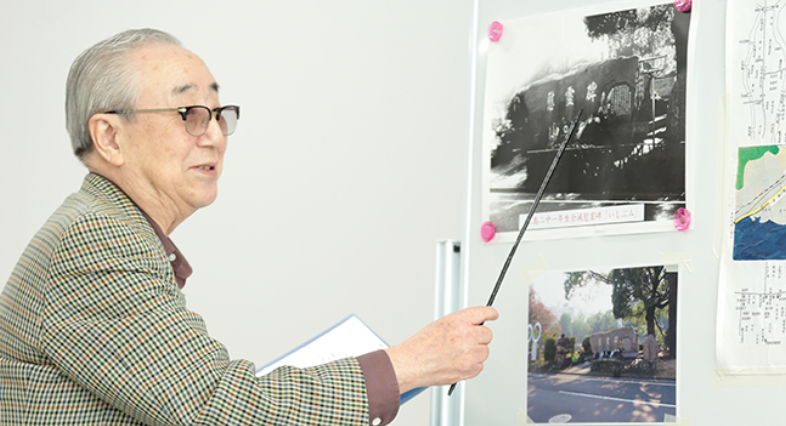 Tell me how old you were at the time of the A-bombing.

I’m 85 now and was 14 and a third year-student of middle school then. I was at the Mitsubishi factory in Kanon-machi, 3.5km away from the hypocenter.

Were any of your family members exposed to the bomb?

My younger brother Masaru, who was a student of the Hiroshima Second Middle School, died near the hypocenter. He had been mobilized to clean up the debris from demolished houses there. All of the 320 mobilized first-year students died. Including him, I lost 10 of my family members from the A-bombing. My eldest sister, who had been evacuated from Nagoya to our home, died together with her five children. Another sister, who was just married, also died. I survived with no wounds. That made me feel guilty. I thought for a long time that I was not qualified to tell my experiences.

Tell us about what happened to you on August 6.

One week before the A-bombing, the demolition order was issued to our house, located in the central area of the city. My mother, Masaru and I moved to the barn at my uncle’s in the mountains on the Geibi Train Line. My eldest sister and her five children moved to a house in Tenjin-machi.
The day before the bombing, August 5, was the first day for Masaru and me to work as mobilized students. We rode on a bicycle heading for the station, but the chain snapped off on the way. I decided not to attend the work that day. He decided to stay at my sister’s in Tenjin-machi, and walked toward the station 4km away. That was the last time I ever saw him. He was two years younger than I.
On August 6, I was a bit late for work because my train had been delayed. No one could imagine an enemy plane would be in the beautiful cloudless sky. The air-raid alert had been cleared. At the moment I put a bag of gravel on my shoulder, I felt something thud and saw a blueish white flash running. I wondered what had happened, and looked at the direction of downtown. There were two burning suns above the city. I was so scared that I rushed into a shelter nearby. At that moment, a tremendous roaring sound was heard and then silence followed. I anxiously crept out of the shelter. What I saw was the frameworks of a five-story building. People outside were bleeding with shards of glass all over their bodies.

What did you do after that?

Since we were ordered to go home, I was going back home with some friends living along the Geibi Line. When we got out of the factory gate, we lost our voices seeing people walking from downtown. All of them were almost naked with their hands up in front of their chests. I felt for a moment as if I saw gigantic mantises walking. We saw many people crouching or lying on the river bank. Casting a side glance at them, we crossed over a log-tied bridge and headed for the west.
Going through burning Koi Station, we walked along the railroads. It was hard to walk avoiding crossties which were breathing fire. Then, black rain started falling. The rain looked like coal tar and dyed even my underwear black. Who on earth knew at that time that the rain contained radiation? A bamboo forest was full of the wounded. We were asked coldly by people who were taking care of them, “Why do you have no wounds?” We continued walking to the north and reached Yaguchi-no-Watashi Station. At the station, we got on a train on the Geibi Line together with a lot of wounded people. Hearing their groans and smelling their blood on the train, I finally got to the barn where my mother had been waiting.

You desperately tried to go back home, didn’t you?

When I got home, my brother, who was three years older, said to me, “Masaru has died.” He lived in a company dormitory of Toyo Industry, the present Mazda Motor Company, and had come back earlier than I had. Masaru was mobilized to a different place each day. On the previous evening, my older brother happened to get information about where Masaru was going on the following day. He had graduated from the same school as Masaru. So, he went to search for Masaru on his way home after the A-bombing. Masaru and the other first-year students of the school had been lining up at the place near the hypocenter. He picked up some ashes which were supposed to be Masaru’s in rows of the dead who might have been the Class 6 students, and brought them back home.
When we were chanting sutras for Masaru at my uncle’s house, a staff member of the kimono shop, who regularly visited us, showed up and said, “I saw a little Matsumoto boy fleeing in the direction of Koi. That caused a big fuss. “Masaru is alive!” However, when we found him at the temple in Inokuchi, a temporary first aid station then, he was already dead. I heard that he had said, “My brother will come to rescue me,” in a weak voice for several hours before he died. Even now, I feel sorrowful, thinking that he meant me when he said, “my brother,” because I was the closest to him. For more than 70 years, I have felt sorry that I am alive, and I have felt guilty as a survivor that I escaped without saving any lives.

How he started telling his experiences

What made you start telling your experiences although you felt you are not qualified?

It’s been six years since I moved to Yokohama from Kawasaki, Kanagawa Prefecture. One year after my relocation, I joined in the Yokohama A-bomb Survivors Association.

Before three years passed, I was asked to be the secretary-general of the association, and I accepted it. Two years ago, in July, Mr. Sato, chairman of the association, asked me to substitute for him, who had scheduled to tell his A-bomb experiences, but couldn’t make it.
It was the first time for me to tell my experiences. Three hundred high school students listened to me. I received a lot of positive comments on my story from them, saying, “I realize the preciousness of peace,” or “I hate war.” I was deeply impressed that although I’m not good at speaking, I could make myself understood.

Have you changed since you started telling your experience?

Yes. Although I regret that I didn’t start it earlier, I’m firmly committed to continue telling my experience until my last day. That is the change.

Thank you very much for your precious story.