Interviews with
HIROSHIMA memory keepers Pass down a storyVol. 8 2016.6.20 up

I will be happy if one person gets motivated by my storytelling, one person out of a group of 50. 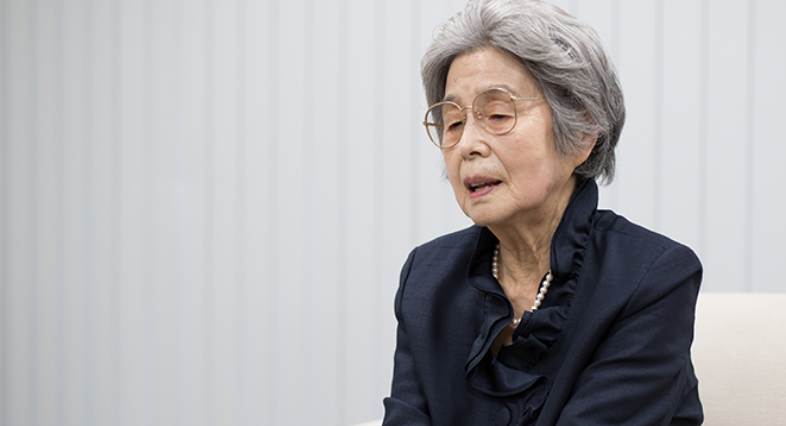 There are people who have committed themselves to passing down their A-bomb experiences to succeeding generations. What do they think of and try to share?
Ms. Yoshiko Kajimoto, 85, is an A-bomb survivor, who was 2.3km away from the hypocenter that day. We asked her what she experienced on that day and what message she wants to convey.

What she experienced on August 6

Would you tell us how old you were when the A-bomb exploded?

Where were you at that time?

I was in Misasa, 2.3km away from the hypocenter.

Would you tell us what happened to you that day?

I remember that I could not have enough sleep the previous night because there were two air-raid warnings issued. The next morning, it was very hot. I went to the factory making airplane parts, chatting with my friends, saying, "I am sleepy" or "It’s hot."

At 8:15, I saw a flash of blue light running on the windowpane. It was very beautiful. Realizing that it was a bomb, I quickly took cover under a machine, covering my eyes, ears and nose with my hands. In our daily drill, we were told that the blast of a bomb would pop out our eyeballs, rupture our eardrums and break blood vessels in our noses. The moment I saw the flash, I was very scared and gave myself up for lost. The faces of my father, mother, grandmother and three little brothers came to my mind clearly

I heard a thunderous roar which made me feel as if the earth exploded, and I felt a shock which made me feel as if my entrails were pulled out. I saw the soil of the ground in front of me blow up, and I felt my body also blow up in the air. I cannot remember anything after this. I got buried under the toppled wooden two-story factory building. It was pitch black when I came to, hearing my friend's screams, "Mom! Help me!" "Teacher! Help me!" I tried to move my body but couldn’t, because I was buried from the neck down under the debris. I could only move my head and hands. When I felt my arms hurting, I realized that I was alive.

When I turned my head, I saw the legs of my friend. I pulled them hard. At first, there was no reaction, but she started to cry, "It hurts! Help!" Hearing that, I was so relieved to know she was alive. At the same time, I wanted to flee for our lives, and I shouted to her, "Let’s get out of here! We are in danger! Fire is coming in a minute!"

We struggled to shake our bodies together with all our might. When her body which had been over mine fell loose, I thought we could flee. However, my right leg was trapped under a heavy pile of fallen timbers, and I felt desperate. Not minding what would become of my leg, I pulled my leg with all my strength. My work pants, monpe, were torn and my leg was bleeding from the cuts, but when I finally became free, all I felt was joy, not pain.

The city was totally changed with gray billows of smoke. I smelled something strange that seemed like rotten fish. It was unusually quiet. Someone shouted, "Hiroshima has disappeared!" People were all black, not only their faces but their clothes. Some were standing still in shock. Some were crying loudly. A person who got injured in the head was bleeding and looked like a ghost. My friend, who had been above me in the factory, had received the worst injury. Some flesh was stripped off her arm. My leg injury was also bad, with the bone partially exposed. Applying a headband which someone gave me, I managed to stop the bleeding from the wound.

After a while, people who looked like "ghosts" passed us, like the people in the pictures kept in the Peace Memorial Museum. They came walking with their hands held up in front of them. The skin peeling off their arms was dangling down like tattered rags. Their faces were swollen up like balloons. Their lips turned over and their eyes were closed swollen up completely. They were all naked and barefooted. I assumed that their clothes and shoes had been blown or burned off. Among those people, I still have a clear memory of a junior high school boy.
He came toward us carrying his severed arm and fell down just in front of me and died there.He had a sad face which looked frightening to me. Before that day, he must have had a big dream and hope.

When we went into the city center, bodies were lying all around. We carried injured people tirelessly. We had to step on bodies with our bare feet. But soon, I was insensitive to those bodies, not feeling sick or scared. I wonder how easily humans can become cruel. As a 14-year-old girl, I had no time to realize how cruel I was when I stepped on and over people’s bodies. I hope that people of today will never ever have such an experience.

On the afternoon of the third day after the A-bombing, I heard our house in Koi had escaped fire. When I was walking home, I met my father. He was very happy to find that I was all right.
He said that he had been trying to find me by calling my name in the ruins of the factory. Because there was a rumor that all the students working at the factory had died, he had almost given me up for lost.
My father, who was born in the Meiji era and always very quiet and strict, cried out with tears, "It’s wonderful to see you alive," holding me and my friend who was with me then, tightly.
My father passed away vomiting blood one and a half years later. I think his death was caused by the residual radiation he was exposed to while he was searching for me by turning over bodies in the city for three days.

After I got back home, my gums started bleeding, I had a fever and I lost my appetite. I couldn’t leave bed until the end of August. My feet became so intensely swollen that I couldn’t walk. The wound on my arm bred maggots three days after I got home. My grandmother removed them using disposable chopsticks, which was really painful, too painful to forget.
A doctor from Shimane Prefecture came to treat me, and took out seven pieces of glass from my pus-filled wounds. My leg wound, which was severe, healed naturally over time.In this way, my life was saved somehow.

How she started to tell her A-bomb experiences

What made you start to tell your experiences?

After I was finished with my husband’s funeral and his first memorial service on the 49th day after his death, my granddaughter, a third year junior high school student, asked me, "Now Grandpa has died, what will you do? Are you able to live alone? Do you have anything you want to do?" I answered, "I have to live somehow." Then, she said, "Why don’t you tell your A-bomb experience?"
I reflexively said, "You must be joking. I don’t think I can speak in front of people." "Yes, you can. You made the closing speech at Grandfather’s memorial service. It was really good," she said.
Soon after that talk, I was introduced to the staff of the Peace Memorial Museum and started to talk as an A-bomb survivor.

I wonder if you have some feeling of reluctance about recalling the A-bombing, even though people want you to tell about that.

Well, if I had had a mind to talk about it from the beginning, I might have intended to remember more accurately. In fact, I had been trying hard to forget.Even my children once said, "You are not the only A-bomb survivor. All the people in Hiroshima are." Moreover, I thought no one could understand my story no matter who I tell.
However, when I told my story to junior high school students for the first time, they earnestly listened to me. This experience gave me the feeling that I should pass down my A-bomb experience.

What would you like to convey the most through telling your A-bomb experience?

Compared to those who listened to me 16 years ago when I started storytelling, there are more people who don’t know at all about the A-bombing. Times have changed. Now even teachers and students in Hiroshima know very little. That is the way it is now. So, I want people to listen in order to know well about not only what happened on that day but also how tough it was to live on afterward.

There was discrimination against the A-bomb survivors, hardships caused by the A-bomb related diseases, and children who got involved in theft or became gangsters to survive the period of food shortages. In fact, weak children died one after another, like the true story that a pebble was found in the mouth of a dead child.
I want listeners to use their imagination by asking themselves, "What would I have done if I had been there?" or "What if my parents, brothers or sisters had been there?"

I would like them to convey what they have learned in their own ways. The ways may be varied, such as by music, by pictures or by writing, by whatever they like. I will be happy if one person gets motivated by my storytelling, one person out of a group of 50.

Thank you very much.