Interviews with
HIROSHIMA memory keepers Pass down a storyVol. 5 2016.6.15 up

I have never seen such a red, beautiful, round thing. 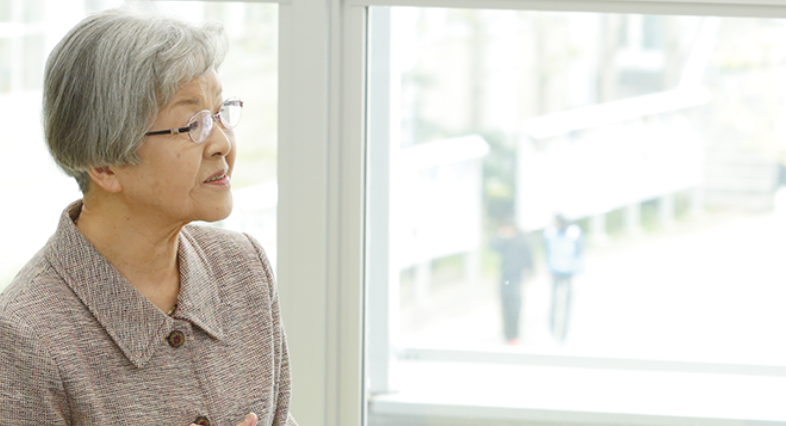 There are people who have committed themselves to passing down their A-bomb experiences to succeeding generations. What do they think of and try to share?
Fusae Nishitomi, 91 years old, was exposed to the A-bombing at Ujina, located 4km from the hypocenter.
We asked her what she experienced on that day and what she hopes to convey.

What she experienced on August 6

Would you tell us what you experienced on August 6?

I was working as an administrative staff member for the Akatsuki 2940 Corps, Army Marine Regiment Headquarters, in Ujina.
On August 6, we attended a morning assembly outside at 8 a.m., and I returned to the office room on the second floor.
The moment I put my papers and my pencil case on the desk, a blast came, and those papers and the pencil case blew up onto the beam of the ceiling.
I was so surprised that I quickly looked out of the window and saw a fire ball.
I had never seen such a red, beautiful, round thing.
I initially thought, “This is beautiful, but it must be a terrible thing.” Instead of going toward the window, I turned around and fled to an air-raid shelter. I felt intense heat. It was very hot. Since I was sitting behind something, I was not seriously burned, but if I had not been shielded, my condition would have been different.

Were you able to flee to an air-raid shelter after you were exposed to heat rays?

Yes, but as Ujina was 4km away from the hypocenter, damage was less than in the city center, and the fires didn’t occur there right after the bombing.
The elegant hall, called Gaisenkan where pianists used to perform, became a temporary first-aid station.
I took care of soldiers there. I gave water and rice porridge to soldiers who fled there. Then, a woman suddenly called me.
She was standing by her husband, who was a teacher of the National Elementary School where I had worked as a substitute teacher, before I had worked for the army.
He was lying on the floor and his shapely nose was cut open in the middle.
Still I remember that his wife said, “He doesn’t answer me when I speak to him.”

Ms. Nishitomi, what did you do after taking care of soldiers?

I stayed at the Army Marine Regiment Headquarters that night because Hiroshima was burning.
The next day, with my friend, I returned to Funairi, where my house was, to locate my house.
When I came to the Miyuki Bridge, I found Hiroshima was completely gone. I realized the meaning of “the unlimited expanse of the ocean.”

By which way did you take to go home?

I walked home through the city. As I approached the city center, I saw many fallen bodies on the roads. I continued to walk, thinking that I didn’t want to see them.
The bodies looked gray when I saw them across the Miyuki Bridge. However, on the way, the conditions of those bodies greatly changed. Toward the hypocenter, the bodies were charred black.
I saw dead bodies with their hair frizzled. My heart was wrenched, thinking, “The heat I felt yesterday made these people change like this. How hot they must have been!”

A little farther on, there were bodies whose faces swelled twice their normal size.
I knew later that their faces swelled not because of burns but because water inside their bodies expanded with the intense heat. Seeing tragic scenes like these, I walked around the city shedding my tears. From Aioi Bridge, I saw bodies floating in the river.
Later, many people painted bodies lying in the river in this scene. However, in my memory, heads were tightly packed on the river surface. I wondered, “Why are they here? Did they jump into the river because of the heat, or were they blown into water by the blast?

A little farther on, I saw a mother in kimono, who was holding her baby, sitting in a fire cistern. I thought they were still alive; however, when looking closely at them, I saw that they were already dead. Even now, I don’t know how they got there. I wonder if they were blown into it by the blast. Soon after I returned home, I went back to the army to give aid.

You said that you had walked around the city all day. Were you affected by radiation?

Strange to say, no. Other people who entered the city after the A-bombing like me are suffering from diseases. However, that is not my case. I wonder if I was born strong.
However, my father, who had been exposed to the A-bombing at Dobashi, passed away on the morning of the 15th, the day of Japan’s surrender, even though he had no outward burns. From August 6, he seemed lifeless and without appetite, staying in the house where my sister had been evacuated.
I made grapes I was given into juice, and I made him drink it. I remember that for the first time after a while he said, “This tastes good!” My tears don’t stop when I speak about my father’s death.

What made her start to tell her A-bomb experiences

When did you start to tell your A-bomb experiences?

It was in 2002. At the request of the cultural section of our neighborhood association, I visited the Society of A-bomb Survivors in Kanagawa Prefecture, and I heard the accounts of that group for the first time. Right then and there, I wrote about my hope of telling my A-bomb experiences actively in the cont-ttl-qnaire. From then, I joined “Gathering for Hamayu Speakers” and began to tell my story at various places.

Now, you are telling your story at various places, including elementary schools, junior high schools and senior high schools. What message would you like to convey to those students 70 years after the end of the war?

I’d like to convey the message that war should never happen. As I was exposed to the A-bombing, I realize the horror of it. We live in the age when we can freely transmit our ideas through the Internet.
I strongly want young people to work for world peace in their own ways.
I want to tell my A-bomb experiences as long as I live to help realize peace in the world. I think it is my mission.