Interviews with
HIROSHIMA memory keepers Succeed to historyVol. 1 2016.6.26 up

I would like to construct a peace learning program

Head of the Peace Porter Project 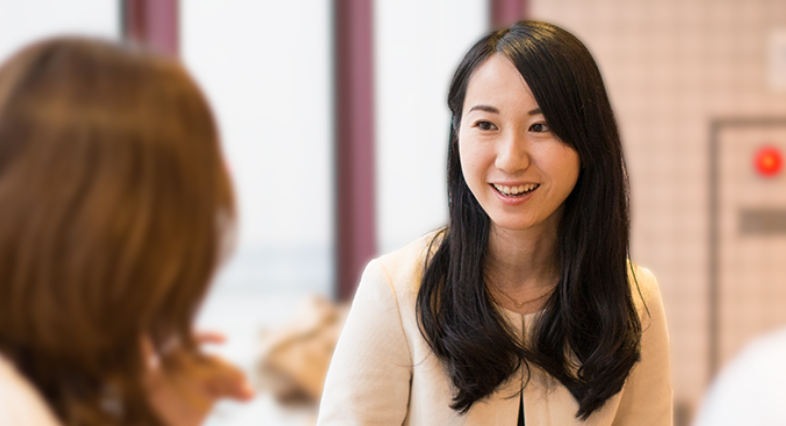 What do people handing down the experience of the A-bombing think and try to convey?
Ms. Yasuda, who is in our generation, has no experience of war.
We asked her what made her start her peace activities, what she thinks when she is engaged in the Hiroshima project, and her message to the same younger generation as hers.

What made you start your peace activities?

When did you start your peace activities?

What was your motivation?

When I was a freshman, I joined the Floating Lantern Project in Peace Memorial Park with my friends. At that time, I found for the first time that there were so many volunteers involved in that project. When I saw those lanterns, I felt something more than just feeling that they were pretty. I wanted to join the project as a volunteer, so I sent an email to the organization after I found it on the Internet.

How did you feel specifically?

Although I lived in Hiroshima, I had never attended the Peace Memorial Ceremony or seen the floating lanterns. When I went to Peace Memorial Park on August 6 for the first time, I was surprised at how many people there were. I saw a large number of lanterns where various people were putting their thoughts on them.

What keywords did you use when you searched for the volunteer groups?

I think I put the words, “floating lanterns, volunteer.”

You are leading your organization now. Have you taken the leadership naturally?

One year after I started the volunteer work, I started the Peace Porter Project. I have met various people, and thanks to their cooperation, I have been involved in the volunteer work for ten years.
In a meeting of the Floating Lantern Project, we discussed the current situation in which A- bomb survivors are getting old and cannot go to the floating lantern place even though they want to. That led to the establishment of the Peace Porter Project. It was suggested that we should take youth volunteers to daycare facilities so that the volunteers can write the messages with the survivors and then bring the lanterns to the Motoyasu River. Then, although I was just 20 years old at that time, I said I would be the leader, and I have been working as the leader since then in a good environment.

About the Peace Porter Project

What does the Peace Porter Project do specifically?

There are many A-bomb survivors in daycare facilities and in their own houses who cannot go to Peace Memorial Park to join the floating lantern ceremony, even if they want to.
Together with other volunteers under 35 years old, we visit them and write their messages and Buddhist names on the lanterns with them. On their behalf, we float those lanterns, which have their wishes of comforting the victims, in the Motoyasu River on August 6.
We also hear the survivors’ experiences when we visit them.

Many volunteers are around 35 year old. Has the way they feel changed through this activity?

When we talk one-on-one, the survivors cry and tears also come in the eyes of the volunteers.
As an organizer, I felt that this was something that can be conveyed only person-to-person.

After the volunteer job, one of the students said, “I thought I had heard the survivors’ experiences, but it was my first time to hear the story one-on-one. I felt the A-bombing and war came closer to me.”

It is said that about 140,000 people died at and after the A-bombing. I think they got a real feeling for the first time that there had been 140,000 actual lives. I think this is also a part of peace learning.

Are most volunteers in the Peace Porter Project from Hiroshima?

Some are from other prefectures.We have been doing this project for about ten years.
Some of the volunteers who were college students, got a job outside Hiroshima and come back before August 6 to join the activities. They tell what they have learned from these activities in their workplaces, such as companies and schools.

When we decided to have this exhibition, we felt that the phrase, “peace learning,” was not familiar to people in Tokyo and northward. Are there any volunteers from Kanto and Tohoku areas?

We have some from Tokyo, but not from Tohoku. I hope they will have more interest in this kind of activity.

About the role of the storytellers of the A-bomb experience

We heard that you got a certificate as a storyteller recently while you were working in the Peace Porter Project.

Yes, I am one of the first storytellers.

Tell us about the training project.

We have to attend a series of trainings for three years to become storytellers.
For the first year, we learn the real facts about the A-bombing. We hear the experiences of about 20 survivors and decide whose story each of us will take over. After matching each survivor to a trainee, trainees are divided into groups for the second year. Two or three times a month, we, about ten trainees, have a session with one survivor.
For the third year, we make a script with 9,000 words, to last for 45 minutes. We are tested by telling stories three times and get a certificate. We also take a course for announcers and study about speech.

Why did you apply for the storyteller program?

I found the recruitment of storytellers in the Hiroshima PR bulletin by chance and applied for it. While I was involved in the volunteer work, I always wanted to convey the pathetic cries of survivors and their wishes for peace in some way. But I didn’t know how to do it.
The storytellers in my generation had the same feeling as me. They didn’t know what to do although they wanted to do something after they read novels about the A-bombing or heard about the A-bomb experience from their relatives. They thought the recruitment gave them a good chance and applied for it.

I can imagine that the three-year training was very hard. Did some people quit?

Yes. The number of the applicants for the first trainees was 130, and 50 people became storytellers this April. At the beginning, there were some people who were younger than me, but now I am the youngest.Some of the trainees might finish the training in later years.

Is it hard to maintain the motivation for three years?

As the training sessions were held on weekdays, it was hard to participate in them while working. However, some people from other prefectures participated in them enthusiastically, although the fare cost a good deal.

What made the people from other prefectures join this project?

Many of the young people came from Osaka and Hyogo prefectures because I heard peace learning is widely practiced there.
Also, many people from Kansai area joined in the activities of my organization (PPP). There were some people from Hokkaido and Kyushu. They had their own reasons, such as having met A-bomb survivors or having read books about war.

Messages to the younger generation

A-bomb survivors’ lives are limited. We will have fewer and fewer chances to hear their live voices. What is important in handing down their voices to the next generations?

“I heard from my grandpa,” or “I heard from the people around me” are important phrases.Whether you are in Tokyo or Hokkaido, you have someone who had wartime experiences. By putting their words you have heard directly into your stories, you can tell them more realistically.
You cannot hand down anything by conveying the messages you have just heard. The reality to me is the anger, grief and smiles of the A-bomb survivors who I have met in my volunteer work.

To act, we definitely need to think. So far as I know from my personal experience, it is important to know, feel, think and act. We cannot skip any one of them. If you cannot feel, you cannot act. Or acting without thinking is meaningless.

Now, in the Hiroshima project of handing down the survivors’ memories, we tell stories in turn in the National Hiroshima Memorial Hall for the Atomic Bomb Victims. I don’t think telling stories is enough, and I have another project with some friends whose main part is a workshop. I would like to construct a peace learning program which encourages participants to think. In that program, I would like to talk about the A-bomb experience as a storyteller.

Because of your experience as a storyteller, do you think telling stories is not enough?

Yes.I told stories to students who came to Hiroshima on school trips several times. When there were 100 students, I didn’t know how they felt after hearing the story. I was discontented with it. It was hard for me to realize that A-bomb survivors experienced such feelings repeatedly.

I would like people to act after hearing stories.We would feel satisfied when they act.
I think peace learning includes watching them act.

Direct communication or feeling closer is important to convey your messages, isn’t it?

I think it is also important to go to places like Hiroshima actually.
I have a sense of crises that Hiroshima will have fewer chances to be selected as a place for school trips with fewer A-bomb survivors. To avoid that, we feel that it is time for us, the storytellers, to receive the baton from them and hand down their messages.

I hope we will have more young people like you.

Yes. There is a limit to what an individual can do. It is good to have storytellers across the nation.They need the power of action, not just waiting for the request of the storytelling.
I would like to increase the storytelling chances in various places across Japan and also introduce the history of war there, in liaison with other storytellers in my generation. We need people who also have the same aims throughout Japan.We need ties with them.By working with them, we will be able to repay the A-bomb survivors who have raised their voices for 70 years so that future generations would never have the same hardship.

We would like to convey the messages from Hiroshima as artists.

If we have various models for peace learning all over Japan, people who want to do something can choose the way they like for peace activities. They can join hands with businesses or other individuals.

Thank you very much.
We will work hard to become like Ms. Yasuda of Tokyo.