Interviews with
HIROSHIMA memory keepers Pass down a storyVol. 1 2015.6.1 up

“I thought that I should record what I experienced.” 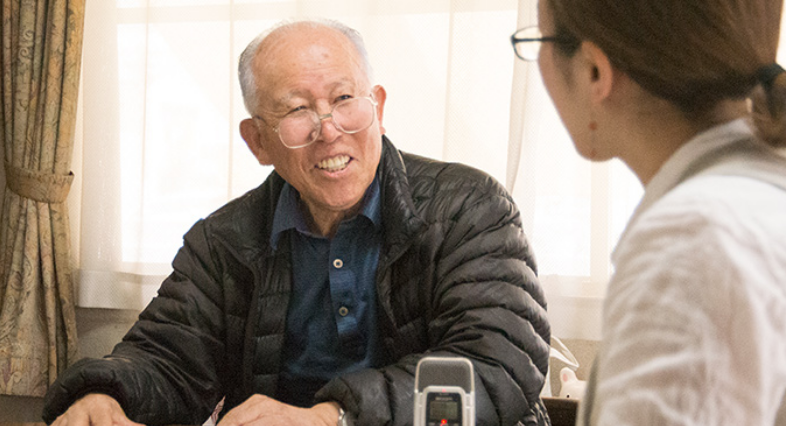 The situation at the A-bombing

Please tell me about the situation when you were exposed to the A-bomb.

I was a first-year student of the Hiroshima High School in the old education system and was mobilized to work at the Nisshin Steel Company. On August 6, early in the morning, we students were instructed to go to the mobilization site, the Ordinance Supply Depot. Later, I was exposed to the A-bomb on my way home by bike about 1.8km from the hypocenter.
I was dazzled by a sudden blast, flung to the ground three to four meters away and lost consciousness.
When I came to, my head was covered with blood from lacerations from roof tiles. I was heavily burned on my left ear and neck, and a big wound near my ankle was open and bleeding. Not knowing what had happened, I walked several hundred meters to my house in the billowing smoke and dust, covering my mouth with my hands and breathing in and out between my fingers.
“I got some burns and external injuries, but thinking back now, I was luckily saved by fateful chance because I had passed through the hypocenter just 15 minutes before the bombing.”

Did your family escape safely?

My grandmother died.
Every day after the A-bombing, I walked around the hypocenter and all over the city, looking for my brother and my sister. However, they remain missing. My father died of the A-bomb related disease at the age of 58, two years after the A-bombing.

Were you walking around the city every day looking for your family though you were injured?

Yes. I looked for my sister around the prefectural office since she was working in house demolition as a prefectural office staff member. I saw many people piled up in a well.
I could not tell if they were men or women, so I tried to flip them upside down with a burned stick to find my sister. However, I couldn’t.

Were there other people who came to look for their families?

Many people came from the suburbs to ask for their family members’ safety.

Please tell me about the situation of the city after the A-bombing?

In those days, there were fire cisterns here and there in preparation for incendiary bombing. Many burned-out bodies were piled up in the fire cisterns, which looked dreadful.
Many charred bodies were lying around on the road heading north from the front of the prefectural office and on the debris from the bomb. I heard that many middle school boys and girls and also Service Corps volunteers had been engaged in demolishing houses around there.
Within the city, we had few doctors and pharmacies, and we had an extreme lack of food. We didn’t have medicine to apply to injuries and burns. Around 5:00 p.m. every evening, soldiers got the injured people together in one place to apply a white ointment to their affected parts.
Many people who lost their houses put up galvanized plates around a drum and they used it as a bath.

Everyone was making use of all kinds of things, weren’t they?

Yes. People had a difficult life for two or three years after the A-bombing. We could not have a stable and calm community, as there were many troubles.
In such a situation, I remember my father, a farmer, gave some vegetables to a lot of people for free. My mother also gave our neighbors some medicine she had saved in case of an emergency.

What motivated Mr. Nagata to record his A-bomb experiences?

What motivated you to record your A-bomb experiences?

I responded to the request to write about my A-bomb experience at my workplace and contributed my experiences to the newsletter, Chugoku Post.

Some A-bomb survivors are not able to write about their August 6th experiences, but you thought that you should write about what had happened, didn’t you?

Yes, I wanted to convey my experiences to others. I have always thought that I must write about them to hand down to others. I often tell my children and my grandchildren about my A-bomb experiences. If I have an opportunity, I tell them to others, too.

When you tell your experiences, what do you mainly speak about?

From my real-life experiences I speak about the tremendous suffering the A-bomb caused and my hope for abolishing nuclear weapons.
If listeners can imagine how tragic the A-bombing was after hearing my story, they should think war must not be made, no matter what the reason.

Messages to the generations which have had no war experiences

What do you think the generations which have had no experience of war should do from now, in order to realize a peaceful world?

To be concerned. I think it is important to listen to other people with interest, to study by yourself, and to become a person who has your own way of thinking.
In order to have awareness of the tragedy caused by war, you should study, ask cont-ttl-qs and have your own steadfast, logical and flexible thoughts. And in order to realize peace, it is important to have your own ideas and have discussions about this issue.
As for World War II, many documents have been published and picture images have been shown through newspapers, magazines and TV. I want the younger generation to have a serious interest in these records and study them, to deepen your understanding of Japanese history. At the same time, so as not to forget the important lessons of war or the A-bombing that brought about many tragedies in this country and abroad, I think it is necessary to talk positively about the need of nuclear abolition with people around you whenever you have a chance to talk.