Interviews with
HIROSHIMA memory keepers Pass down a storyVol. 2 2015.6.3 up

I hope that people who were born into this peaceful world take action for the future. 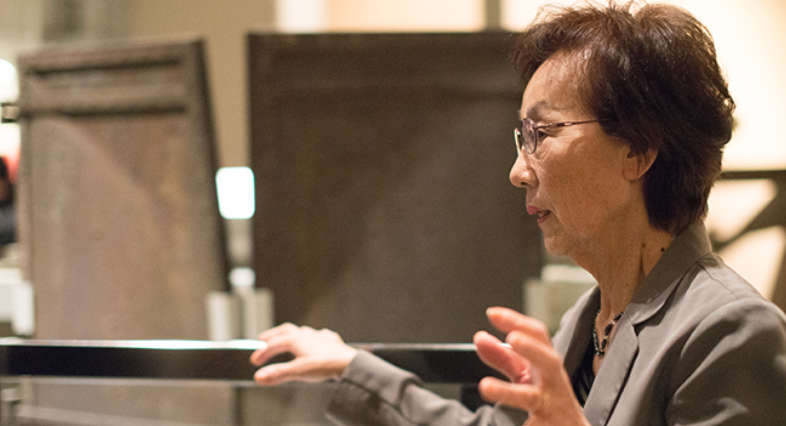 What do people handing down the experience of the A-bombing think and try to convey?

Emiko Okada was exposed to the A-bomb in her house at 2.8 km away from the hypocenter when she was eight. Her sister, 12-years-old at that time, has never come home since she went to demolish buildings. We interviewed Ms. Okada, who has been telling her experiences in various places as a storyteller of the A-bombing.

About her experiences of the A-bombing

We had solid military education. Solders were respected as a great occupation at that time. If I had been a boy, I would have thought that I would like to join the army.
I knew that not only Tokyo and Osaka had major air raids but also parts of Shikoku and Kyushu.
However, we believed in our victory due to the radio reporting that we had been winning the war. Meanwhile, materials to make arms were scarce.

Could you tell us what happened to you on August 6?

I was exposed to the A-bomb 2.8 km away from the hypocenter.
On the morning of August 6, my mother, brother and I were having breakfast after the air raid warning was canceled. Suddenly something flashed intensely and I was blasted away to outside. At first, I didn’t know what had happened.
When I looked around, my house was leaning. When I went outside, all of the houses, as far as I could see, were leaning, too. After a while, fires started all over Hiroshima. I had to run away from the fires. My sister has never come home since she went to demolish buildings.

I hear that the city center was a sea of flames. Did you run away in the flames?

Yes. While I was running away, I saw dead bodies burned red all over, and I shrank at the sight.
The people were so swollen that they couldn’t be recognized. Their hair stood on end. Most people were almost naked.
Their skin or flesh was hanging down. There were children with their eyes popped out by the blast and heat.
The wax figures in the exhibition of Hiroshima Peace Memorial Museum wear clothes and can be recognized as human beings. However, people who I actually saw at that time were far from human beings.

Some people were trapped under the collapsed buildings. Because their mothers were dying in the flames, children were crying and shouting, “Help! Help! ” I saw many people dying in front of me. When the fires settled down, there was nothing left, so I could see the blue of the Seto Inland Sea. A lot of people including children had turned into ashes.
I hate sunsets.
A crimson sunset still reminds me of that August 6, making my heart wrench. I couldn’t help the people in front of me. Nobody could. I left them and ran away. That was what happened on that day.

Have you had any effects of the radiation from the A-bombing?

Those days, most people didn’t know that radiation was emitted.
When my brother and I were in the east drill ground, I had bleeding from gums and lost a lot of hair. I felt fatigue and most of the time I lay down with dead bodies.
Later, I was diagnosed “Aplastic anemia (PNH syndrome)”, which leads to fewer red calls in my blood.

I believe many children lost their parents in the A-bombing.

There were many A-bomb orphans after the war. They had been evacuated to the temples in the country side. They looked for their parents in the city center of Hiroshima, which was completely destroyed and burned out.
They didn’t have a family to protect them. They were always hungry. They had to steal something from others in order to live.
The survivors suffered from radiation effects physically and mentally.For about five years nothing changed in such a daily life.
Some A-bomb orphans worked for adults, stealing rice and vegetables, or earning money as a shoeshine. The adults who controlled them were drinking. Maybe adults were much weaker than children. There were some who committed suicide.
Those children couldn’t go to school, so they couldn’t calculate, read or write. It means that they couldn’t get jobs even though they wanted to.
Some yakuza (Japanese mafia) from Kanto and Kyushu areas came into Hiroshima and gave those children food and guns.
I sometimes meet or see the people who used to be A-bomb orphans. They live quietly now.

Why did she start telling her experience?

You tell your A-bomb experience now. When did you start testifying about your experience?

I started it 30 years ago when I met Barbara Reynolds, an American woman. When I went to the U.S. for the first time, as one of the A-bomb survivors, I gave my testimony at community centers, schools and churches. At the end of the gatherings, people hearing my story never failed to say, “Japan attacked the Pearl Harbor first.”

Each time, Barbara, who organized the meeting, said, “People can start war immediately with arms and violence. However, talking to people face-to-face and handing down to the following generations are the starting point to make peace. We should talk with people in Hiroshima.”

It is easy to say “world peace” or “the abolition of nuclear arms.” What is important to realize world peace is to understand people close to us and get on well with them. I try to see as many people as possible through testifying.

“To understand people close to us and get on well with them.” is important, isn’t it?

When I went to India and Pakistan as a storyteller, the children drew the Indian, Pakistani and Japanese flags and said, “We want to be friends with Japanese children.”
I realized that it is necessary that young people in the world hold hands and take actions together for the future. We survivors have limits of time, even though we tell our experience as much as possible.

What does she want to convey?

I am impressed at your passion for the future. Do you have any message to the younger generation?

I hope that people who were born into this peaceful world take actions for the future.
This is why I am interested in this project.
Young people like you have limitless potential for the future. You are young, smart and active. I would like you to think more.
Please realize that using nuclear weapons is NOT the history of the past.
There are still 16,300 nuclear weapons in the world. The biggest nuclear power is Russia and the second is the U.S; then China, the U.K., France India, Pakistan and North Korea are following.
For our future, I hope that you send this message to the world, not only from Hiroshima and Tokyo but also from many different places.
I want to hand down my experiences when I have chances to see people like you.
I would like you to convey what you see and hear and how you feel with your own words.
That is all.