Interviews with
HIROSHIMA memory keepers Succeed to historyVol. 3 2016.7.5 up

Hope to Convey What Happened in Hiroshima by Translating into English

An organization promoting peace based in Hiroshima 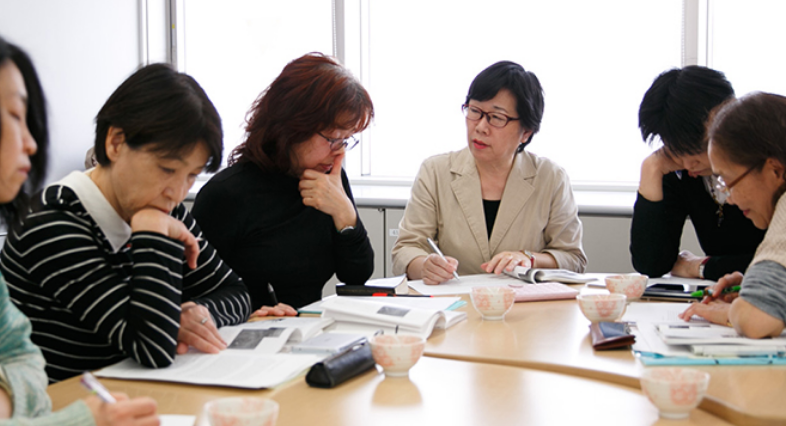 What do people handing down the experience of the A-bombing think and try to convey? HIROSHIMA SPEAKS OUT http://www.h-s-o.jp/ (HSO) has been translating memoirs, books and letters by A-bomb survivors and conveying them to the world. We asked the members about their activities and their thoughts.

About activities of HSO

HSO has been working on conveying the A-bombing, with Ms. Michiko Hamai as the director. Ms. Hamai, can you tell us what made you start your activities?

I was born and grew up in the Kansai District, and there, peace education focused mainly on discrimination issues such as discrimination against outcast people. I knew that the A-bomb was dropped on Hiroshima, but the knowledge receded into a vague memory. When I moved to Hiroshima and learned about it, I felt “Now, I know the facts of the A-bombing,” and I thought I had to convey what I had learned to people, just like myself, who didn’t know.
In Hiroshima, we have a lot of direct opportunities to hear survivors’ stories. I thought I might be able to convey them to the world by translating them into English. Not only survivors’ stories, but also their memoirs and letters. I asked my friends to help, and they were willing to. That was the start.
We also translate English materials into Japaneseand have posted all the materials in both languages in our website, so that we can convey the A-bombing to people in Japan and abroad.

So, this group started with responding to your inspiration, didn’t it?

Yes, I always appreciate that so many members with English and IT abilities have been working together on what we have done so far.
I could never have done even 10% by myself.
There are about 20 members in our group. Each member joins us with what they can do when they have time.

(to other members) Did you ever participate in any peace activities like this before joining HSO?

I think many of us were involved in some activities to a greater or lesser extent. Agreeing with Ms. Hamai’s idea, we invited our friends, which has made this group bigger and more active.

I joined this group when an interpreter at the same workplace introduced it to me. Honestly, I was tired of this sort of issue, feeling like, “That’s enough!” before joining this group, because I had studied peace education since I was a first grader.
Also, when I worked in Tokyo, I didn’t think about more than what I already knew.People around me didn’t know about the facts, or I didn’t have chances to be involved in any activities, either. Now, I pick up every single word and think in detail what the writers meant when translating for HSO.
Therefore, the descriptions become so vivid that they pierce deep into my heart.

About difficulties in translation

What book are you translating now?

HSO Hamai) We are working on a book, titled “Houses for Hiroshima,” published in November, 2014 by a group led by Yoko Imada. This book is about Dr. Floyd Schmoe, an American, who built 21 houses for survivors who lost their houses in the A-bombing.

What was the first book your group translated?

HSO Hamai)It was Floating Lantern, memoirs of parents who lost their children in the A-bombing. When I read it, I thought it definitely had to be translated and conveyed to the world.

Tell me difficulties in translation, if there is any.

An HSO member）Since I’m Japanese, I understand what the writer wrote, but I sometimes think of whether I really understand what the writer meant to say.
I always start with thinking about the writers’ feelings at the time they wrote it.
Dialects, town names which don’t exist anymore or which have changed, expressions that old people used to use and specific words related to the A-bombing are also very difficult.
There are a lot of cases that require knowledge about Hiroshima and the A-bombing to some extent.I’m afraid that our translations might be short of what the writers meant.

I think you encounter cruel and tragic expressions when you are translating, right?

HSO Hamai)Yes, there are a lot. But I think there must be a lot more that are too cruel for survivors to write.

An HSO member)I once helped to call for writing messages on lanterns to float on August 6. There were some people who said, “I’m so sorry, but I don’t want to remember,” when I asked passersby in front of us.

HSO Hamai)In fact, there are many survivors who come to the Peace Park very early on the morning of August 6: around 4 o’clock, for example, or after the memorial ceremony finishes and all the participants have gone.

An HSO member)Memoirs were often written by elderly people who had never written anything in their lives. They decided to write because the time left for them was getting limited. While those memoirs are not sophisticated enough for us to translate, they touch our heart.

Translation from one language to another word for word doesn’t make others understand what the original writing means, does it?

An HSO member)Now, we still have survivors around us when we are not sure what they wrote. Like, “What do you mean by that?” But when there are no survivors to ask,it will be more difficult to translate their memoirs.

About their vision and messages

Do you receive any feedback or messages from abroad after they visit your website?

Yes. We received a lot of messages and inquiries from France and Germany,especially from Germany. For example, “May I use the contents in my book?” or “Let me use your site in my lecture.” Not only from abroad, but we have also received feedback from people in Japan. We recently received an email from a Sunday school teacher in Hokkaido. She said in her email that she knew the facts of the A-bombing for the first time in her life and that she wanted to tell her students the stories she saw in our site.

Can you give us, the younger generation, some advice on how to pass down the facts of the A-bombing that we have learned through this project?

What one person can do is limited. But if you try to do your best, you will be helped and supported by your friends, and will have an even wider circle of friends.

Thank you so much. Can you tell us your future vision of activities?

We hope to convey what A-bomb survivors wrote and what they told us in both English and Japanese, by translating them into English, sothat many more people around the world will be able to know what nuclear weapons brought to human beings and how brutal those weapons are. I believe that conveying the facts will help abolish nuclear weapons.