Interviews with
HIROSHIMA memory keepers Pass down a storyVol. 4 2015.6.12 up

“We only have one life to live.” Can you find your dream in life while at the same time killing people in war? 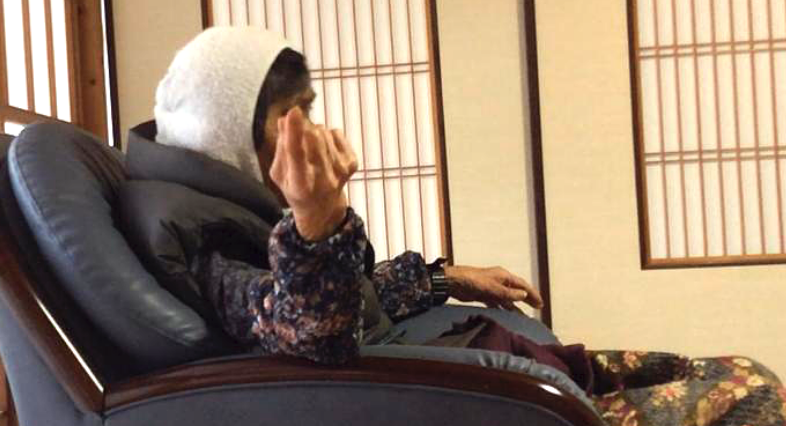 What do people handing down the experience of the A-bombing think and try to convey?
Here is Ms. Kubota’s grandmother. For the first time, she talked about what she experienced 70 years ago, prompted by this project.
We asked her about her days before the A-bombing and the day of the A-bombing (August 6) when she did rescue activities, and asked for her message to the younger generation.

About the days before the A-bombing

Grandma, you are 90 years old, aren’t you? So, you were 20 years old when the war ended. That means the days in your teens were in wartime, weren’t they?

Yes, they were. When I was an elementary school child, Japan started the war against China, the Second Sino-Japanese War, and we had another war without a break. However, I visited Manchuria for summer vacation, where Japan had established a puppet state, Manchukuo.

I have long been wondering why you can speak English, which is unusual for your generation.

At my school then, there were many foreign teachers. I was also involved in volunteer activities at a church where they spoke English. I participated in a variety of activities.

Your school had English classes, didn’t it?

Yes, it did. It was a Christian missionary school. We had English classes on a regular basis, and there were many returnee students. At school I was taught that our age would be that of the three Ms: Motor, Money and Men. Its education never seemed exclusive to me. There was no atmosphere like “Hate the U.S.!” at all.

It might have been tough to be missionary school students in wartime, I guess.

Just before World War II broke out, all the foreign teachers were sent back to their homeland by ship.
Many people were mean to us. Some said we went to a spy-training school. After the military police started to have an eye on our school, prominent teachers were expelled first. Then, some new teachers were transferred to us. The environment surrounding us changed.

About the day of the A-bombing, August 6

Where were you when the A-bomb was dropped?

I happened to be home in Misasa, which was 2.1 km away from the hypocenter.
My family house was strong enough to withstand the blast of the bomb, but the windowpanes were broken. I got several glass splinters in my right arm, but my injuries themselves were not serious.

Did your house catch on fire?

Yes, it did. The heap of lumber in the nearby lumber dealer’s yard caught on fire, and our house was under a shower of leaping sparks from it. When I saw the roof of our house start to burn, I put on work pants, monpe, and a short-sleeve white shirt, wrapped a wet washcloth around my head and fled on my bicycle with a quilt tied on its luggage carrier. I was heading for the Ota River, where I could overlook the city. On the way, I heard someone shouting, “Help!” from under a collapsed house. I stopped and found an elderly woman trapped under the house debris. Removing the lumber and a pillar which had fallen across each other, I managed to free her. Then, I carried her on my bicycle’s luggage carrier to the bank of the river.

What was going on at the riverbanks?

When I reached the bank of the Ota River, which was famous for cherry blossoms, it looked red there with a great number of seriously injured people. I saw many people lying on the ground, and many bodies were floating in the river. Among those bodies, I could see living people. All of them might have escaped and arrived there. I put the elderly woman down from my bicycle there and turned back the way I had come. I rescued several more people.

One of those whom I had rescued said to me, “You are heaven sent. I learned for the first time in my life that there is a real hell, and I also learned that there is a Buddha in the hell. I will never forget your act of grace. Even after I die and become a Buddha, I will look over you, young lady, and repay you in need. Please remember my words.” Ever since, whenever I run into trouble, I have remembered that and tried to stay calm, saying to myself, “Things will become all right.”

You went back and forth by bicycle to rescue people. How brave you are!

I was not a Christian, but our school taught us to think of how to help people in trouble. All the students grew up thinking that way. So I naturally tried to help them. But if it had not been for my bicycle, I could not have carried them to the riverbank.

Did you enter the central area of the city after you rescued those people?

No, I didn’t. When I was about to enter, I saw some people pull down dead bodies, out of a street car which was burned in the A-bombing with pickaxes, and put them onto a truck. I felt a sensation of dizziness and hopelessness. So I turned around and went back to the river bank.
That night, I saw fires burning here and there, and smelled human bodies burning.
During the day, it was hot and quiet with nothing to shade us from the sun. When it got cooler after sunset, I heard voices from under the burned debris. They groaned, “Please give me water.” I was told not to give them any water even though they wanted it, because they would die once they drank water.
But I thought that those people had no hope for their recovery. So, hardening my heart, I decided to let them drink water. I gave them water until my canteen got empty. Everyone wanted water.

Grandma, you think such a tragedy must not happen again, don’t you?

Japanese were not the only victims.Prisoners of war, *students from Southeast Asian countries, with whom I had friendly relationships, and people from the Korean Peninsula also died in the A-bombing. *Government-financed students from Japanese colonies in Southeast Asia. The children of notable families and politicians were here to study.

Message to the younger generation

You should be productive. You will be happy when you see what you have made together with your friends. Even though your purse is empty, you have a skill or a specialty, such as being attentive, powerful, and tall. You can get together in order to create and produce something by yourselves with many ideas, like the people who rebuilt Hiroshima from the ashes. If you set a goal, you can have a dream in life.
After the war ended, there was nothing left. When I had a flat tire on my bicycle, I couldn’t find any tire to replace it no matter where I looked. I couldn’t find even a water hose, either. How difficult it is to live without things that we take for granted.
It is more important to produce something like food, furniture and tools than to kill people.
I would like to say to young people, “We only have one life to live. Can you find your dream in life while at the same time you are commanded to kill as many people as possible in war? You have no future.”

Grandma, I remember you saying that you have an idea.

Yes. Many people are visiting Japan from abroad. I would like to make folding fans to give to those people as souvenirs, on which I write, “Thanks for visiting Japan, which has been peaceful for 70 years. Please enjoy your stay in the country which won’t wage any wars.”