Interviews with
HIROSHIMA memory keepers Pass down a storyVol. 3 2015.6.10 up 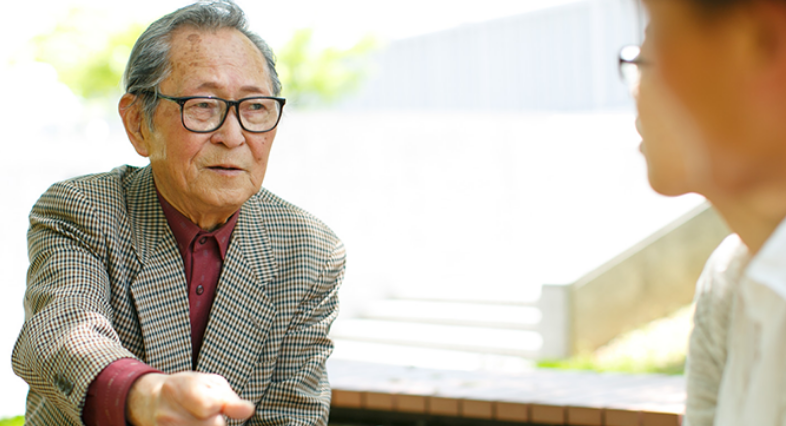 What do people handing down the experience of the A-bombing think and try to convey?

Mr. Kono was exposed to the A-bombing in a munitions factory located 4.1 km from the hypocenter and then soon entered the city to look for his family. When young, he thought that war was stupid, which was not common in those days, and had quarrels with his father who hoped for his son’s success as a military man. We asked him about August 6th of 70 years ago.

Mr. Kono, you look so fine. How old are you now?

You were a student at the age of 18. In those days, what did you think of war?

It was a time when we took for granted that we should devote everything for the country. My father wanted me to succeed as a military man.
We were educated to believe that it was honorable to die in war as a military man, so many of my classmates wanted to join the Students’ Aviator Preparatory School and some applied for admission to the school.
Among those young people, I was an oddity. I thought that war was stupid because people were killed in war. I don’t know why I had such an idea.

Didn’t you need courage to deny war in those days?

Yes. My father told me to volunteer to go to war. I said, “I don’t want to die in vain.” We often had quarrels.
I also got into arguments with classmates who believed that a divine wind would blow to protect Japan in case of emergency. I was once called unpatriotic.

It was an era when the whole country approved making war, wasn’t it?

We received the education that the emperor was a living god and that we should fight to the last man.
Before the age of 20, we were examined for conscription. Others wanted to pass the physical examination as Class A, so they took the eyesight test with both eyes when they should look with one eye, or standing in front of the line. On the other hand, I replied, “I can’t see,” even though I could see. As it was the time when the speeches and the actions against the country’s policy were strictly controlled, I think my conduct was bold.

Please tell me about August 6.

I went to a technical school, Hiroshima Electric School. When I was a second-year student, the war situation had deteriorated, and we had no classes. Every day we worked at a munitions factory which processed food and made canned products.
The work site was the Yoshimura Brewery in Nagatsuka Gion-machi Asa-gun (present Asaminami-ku, Hiroshima City). On that day, I went to the work site by bike, changed into my work clothes and was waiting for my classmates indoors.

Suddenly, there was a flash. At that moment I thought, “An incendiary bomb was dropped even in the daytime.” I was blown away by the blast and lost consciousness. When I came to, I found that I had been blown four or five meters away.

I escaped injuries because of the distance from the hypocenter, but if I had gone into the building a few minutes later, I would have been exposed to the A-bomb directly.

What did you do after you came to?

I didn’t know what had happened, and I ran to the air-raid shelter behind the work site. After that I began to worry about my mother, brother and sister, so I headed for Hiroshima City by bike. When I came to Misasa Bridge, I found it was too badly damaged to cross. I chose another route to enter the city.

When I came into the city center, I saw a streetcar burned black, only its structure remaining. A horse cart had fallen with the horse dead. On the way, I passed a man on the road who said to me, “My head hurts. Can you take a look at it?” The blood was pumping out of the cut. Feeling sorry for him, I was not able to tell him the truth and just said, “It’s a scratch. Be brave” and left.
When my bike got a flat tire, I returned home pushing it.

So, that means that you returned home passing near the hypocenter, didn’t you?

Yes. The river was filled with people who wanted to drink water.
Now, I think I should have helped them, but at that time I just concentrated on looking for my family.

I wonder why an air-raid warning or a yellow alert wasn’t issued before the A-bombing. If there were an alert, many more lives could have been saved. I feel bitter and indignant about that.

His thoughts for peace

Please tell me your frank thought toward the U.S., which dropped the A-bomb.

Considering the situation, I have some bad feelings against the U.S. I also have hatred. However, things are different in a one-on-one interaction. Recently, I have had chances to meet people from foreign countries, including the U.S. The other day, people from Holland visited us and we enjoyed making rice cakes together. So, my feelings are complicated.

Would you give a message to the next generation?