Interviews with
HIROSHIMA memory keepers Succeed to historyVol. 6 2016.7.12 up

I am doing my activity as a prayer for the repose of the souls of the deceased in the A-bombing. 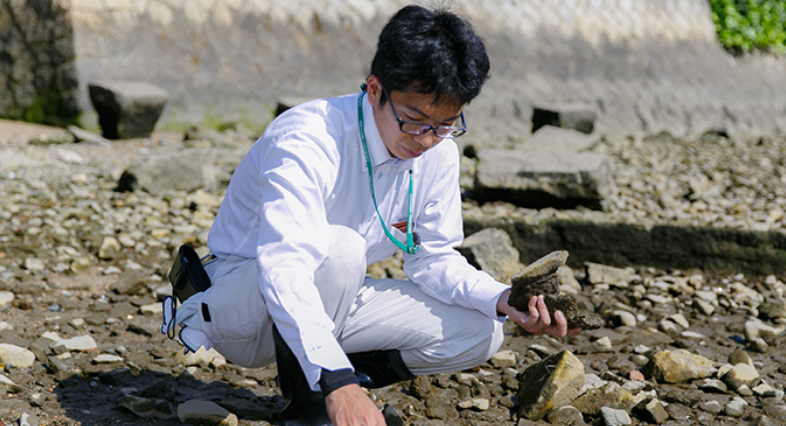 There are people who have committed themselves to passing down the A-bomb experiences to succeeding generations. What do they think of and try to share?
Mr. Reibun Kayo is a Research Fellow at Hiroshima University. He has been collecting artifacts and relics, such as A-bombed roof tiles, in the rivers in Hiroshima, which he sends overseas to educational institutions. We asked him what made him start the activity and what he hopes to convey.

What made him start collecting A-bombed artifacts

Would you tell us what you are doing in your peace activity?

I am collecting A-bombed artifacts in the riverbeds in Hiroshima.
Now even 71 years after the A-bombing, we can unearth so-called A-bombed roof tiles, whose surfaces were exposed to the A-bomb heat rays and melted, pieces of glass also melted by the heat rays, objects of various debris fused by scorching fires after the bombing, and debris of the destroyed A-bomb Dome. They are still lying there.
I collect and send them overseas to universities and other educational institutions.

When did you start collecting?

On the first day of my arrival in Hiroshima at the age of 24, I went down to a riverbed and started collecting. It has been 14 years since then.
I started to send those artifacts overseas five years ago.
I was doing this alone for the first nine years before I organized my activity five years ago.

What made you start collecting artifacts?

When I was in the second year of junior high school, I saw an A-bombed roof tile for the first time. On our school trip, I listened to a story by an A-bomb survivor, whose name was Ms. Yamaoka. Her sorrowful tragic story left me speechless. In fact, I am from Okinawa, where numerous civilians' lives were lost, and many of them left no remains. I learned that in Hiroshima, numerous people had gotten burned and badly injured, and that those people had gone into the rivers and died in agony.

After Ms. Yamaoka's story, I went to talk to her. She said, “I am glad that you came all the way from Okinawa and got interested in my story. Still lying in the riverbed are many A-bombed roof tiles, which are filled with numerous people's pathos. I am sure that you will find some if you try praying for them. Please take them back and make the most of them for your study.” Then, I tried looking in the riverbed with my friends and found a melted bottle and a piece of roof tile. We were so surprised to have those real artifacts in our hands. At the same time, seeing the awful scars of those artifacts, I was so frightened to think how terribly people must have been burned by the heat that was strong enough to melt glass bottles and the surface of roof tiles. With that experience of 20 years ago, I began to think of collecting artifacts in Hiroshima again. This is how I started this activity.

It is encouraging for storytelling survivors to know that survivors' stories moved people like you.

There were 350 students in our year at school. Among us, I am the only one who works for the A-bomb and peace-related activities. Even though there is only one in 350, it is not zero. There will surely be a person who goes forward to do such activity touched by a storyteller's story. I hope that storytelling survivors and storytelling successors continue to share their stories and thoughts with people.

What he has been doing

A-bombs kill in five ways: initial blast, heat rays, radiation, fire, and suicides that many survivors committed later. Let me explain about the last one, suicides. Some of those survivors had gotten burned severely on the faces and on other parts of their bodies. Because of those burns they suffered from other people's odd looks, discrimination and bullying. Feeling hopeless about their future such as love or marriage, they killed themselves.
Also, enduring continuous pains coming from organs damaged by radiation and cancers occurring one after another, many survivors couldn't expect the recovery of their health. So they committed suicide with no expectation for their bright future.
It is very hard to learn all these factors in a short time.
When you carefully look over each artifact, you can guess the strong power of the A-bomb, such as the strength of heat rays from an A-bomb roof tile or of the fire from a melted glass bottles.
The places where I collect artifacts are supposed to have bank reinforcement works. In those works, artifacts will be taken away together with other sediment. Before that happens, I hope to collect as many as possible to show the awful effects of the A-bomb.

Would you tell us how you collect those artifacts?

I walk along the riverbank and dive into the river to find them. I sometimes use a crane to pull out heavy ones. With repetition, I have learned when to go, where to dig and how deep to dig. Now I know low tide is the right time. In the meantime, I have learned to find more and more objects in a short time. I never come home empty-handed now.

I understand you are sending those A-bombed roof tiles overseas. Did you have such requests?

No, I didn't. The fact is that Hiroshima University offered them, not that I got a request directly.

In 1949, when Hiroshima University was established under a new system, the first president, Tatsuo Morito, sent request letters to 600 higher education institutions in the world asking them to donate books and seedlings to the university's library and campuses in Hiroshima city, where everything was burned and lost.

. Choosing about 150 universities from the list, I sent them letters and announced that Hiroshima University would like to send A-bombed roof tiles in return for the donation they had made 60 years ago and as a symbol of peace.
As well as universities, I sent the same letters to about 40 museums in the world.


As of May 2016, I have sent roof tiles to 51 universities and six museums in 19 countries, and also to four elementary, junior high and high schools in Japan.

How did those universities and museums feel about what you sent?

Since I sent them to the universities and museums that were willing to accept them, they are pleased with those artifacts. Sometimes I receive letters, attached with pictures, reporting how they exhibit those roof tiles and how they use them in lectures.

Messages he wants to convey

What has made you keep doing this activity since you were 24?

I am doing my activity as a prayer for the repose of the souls of the deceased in the A-bombing.
I learned that in Hiroshima there were families whose members were all lost in the A-bombing. I wondered who would pray for their souls when I started this activity at the age of 24.
I was helped by the government welfare benefit when I was a child. But those victims in Hiroshima weren't. They couldn't get even a cup of water or medical treatment and died. They must have wanted to get some help. I cannot imagine how painful, bitter and hopeless they felt when they were dying. I am doing this activity hoping to console the souls of the deceased. I will continue this for the rest of my life.

Thank you very much. Here is one last question from a college student who is involved in this 3rd Generation Exhibition.
“When we would like to be involved in war and peace issues, is there anything we can do as college students?”

You can do almost anything you come up with. It is important to do something by yourselves with no support from any religious or political groups. There might be some people who have different opinions. Please stay pure and determined.