Interviews with
HIROSHIMA memory keepers Succeed to historyVol. 9 2017.7.21 up

Don’t quit learning about war, please, though you feel scared.
Please tell people around you about war that occurred in the past. 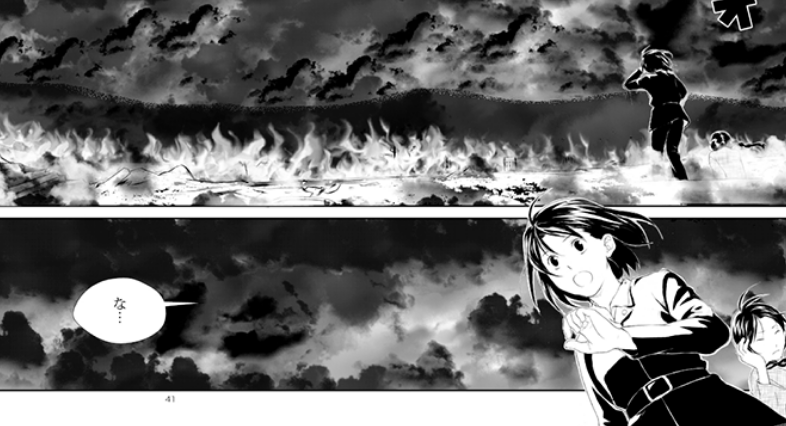 There are people who have committed themselves to passing down the A-bomb experiences to succeeding generations. What are they thinking and want to share?
Ms. Kanabun published a manga about her grandmother’s A-bomb experience on the internet in Japanese and English.
We ask her how she started publishing her cartoons and what she wants to convey.

How she started publishing her manga

First of all, would you tell us about yourself, please?

I’m an office worker. I come from Miyoshi but live in Hiroshima now.

Would you tell us how you started publishing cartoons of your grandmother’s A-bomb experience?

When I was a high school student, I wrote about her A-bomb experience and presented it in the class of Japanese Language Expression. However, it didn’t appeal to anyone through reading what I wrote.
Judging the content by the title, “An A-bomb Experience,” the classmates didn’t want to read it, as they imagined that the story must have been about someone’s life of many troubles after the A-bombing. No one was interested in a dark, miserable story. Buried as a piece in a collection of compositions assigned in the class, I think few juniors read it now.

However, if it was a manga, I would wonder what it is and take a look at it. In the school library, there was the manga, Barefoot Gen, and I knew students who had read it appreciated it and talked to each other about it. I believed in the power of manga.

When I was young, there were many A-bomb survivors and people who knew about the A-bombing, even in the countryside like Miyoshi far away from Hiroshima. My grandmother was one of them.

Every summer, teachers gave us homework to listen to A-bomb experiences, or they invited the survivors to tell us their stories. Sometimes they showed us some animated films. The A-bombing was not an unusual topic of our conversation about the past.

Through learning A-bomb experiences, I gradually felt that just listening to survivors and talking to each other didn’t make us work forward. We would say, “War is horrible! A-bombing should never occur again!” That was all.
Listening to survivors’ stories was meaningful but it just seemed to me that the story was just listened to, and no one would pass it down to the next generations. For example, we listened to the story of Uncle Tsubaki and wrote the report in our elementary school summer vacation homework, but we don’t remember it.

Though it is important to share the idea that war is horrible, I don’t think we discussed what action we could take. Maybe at that time many survivors were still alive and we could listen to their stories anytime then when they themselves were acting for peace.

Would you tell us why you started publishing your manga on the Internet?

Even though you publish a manga as a book, if people don’t take a look at it, the book won’t be read. I think there are even fewer people who would pay to read a manga about the A-bombing.
However, if the manga were published on the Internet, people surely will take a look and read it, because it’s free. People can read the manga without going to a bookshop or without living in Hiroshima. So, because I just wanted to tell about my grandmother’s experiences, I published them on my website, not as books.

Would you tell us some feedback you were impressed after publishing your manga?

I’ll tell you one of them.

I read your manga “The story of a girl who survived the A-bombing.” I’m 25 years old. Sometimes I had opportunities to learn about the A-bombing on Hiroshima, but never heard about the girls who drove streetcars and Girls’ School of Hiroshima Electric Railway.
There are still countless facts that haven’t been told yet. I think the A-bombing has changed people’s lives.

I’ve neither experienced war, nor the A-bombing. Moreover, there were no survivors around me and I never had an opportunity to listen to their stories in person.

I remember the Hiroshima Peace Memorial Museum clearly, when I visited it as a student. The pictures drawn by the people who miraculously survived shocked me. However, I could hardly understand what the survivors who had actually seen the tragedy said or drew. The reason is that I’ve never felt such horror or threat. I think because Japan has been peaceful since then, it’s hard for me to understand it.

Though you haven’t experienced the tragedy, you can learn from it. It is our duty, living in peace nowadays, to know what the A-bombing was like, what happened after that and how it changed people’s lives. I think it is the only way not to repeat the same tragedy.
You should be against war by your own decision, not because your country, your national law or people around you are against war.

I hope your grandmother’s memory will contribute to peace for many people. Believing that our future will be bright, I close my writing. Thank you for reading this.
From Ima-chan

Among the feedback, I was surprised to know that schools don’t have special classes to learn about peace on August 6 and 9, except in Hiroshima and Nagasaki.

Now, the number of survivors is decreasing as well as opportunities to listen to their stories. These stories might be relegated to the distant past in the future, even in Hiroshima.

Message she wants to convey

From now, do you think of doing any new activity in addition to writing manga and other activities you’ve done?

I think I will just keep drawing manga at my own pace. When people talk about the A-bombing or war in their daily lives, they don’t seem interested. So, if I was asked by someone who is interested, I would suggest there is such manga as mine to read. That’s enough.

Lastly, would you give a message for people who will come to our exhibition, please?

War starts without our noticing it in daily life. I think knowing about war and the A-bombing and having the opinion, “Absolutely no more!!” can deter warfare and motivate us to keep peace.Don’t quit learning about war, please, though you feel scared.
Please tell people around you about war that occurred in the past.