Interviews with
HIROSHIMA memory keepers Succeed to historyVol. 8 2016.7.16 up

I haven’t experienced war, so I can talk about the atomic bombing with the same viewpoint as young people, which I think is significant. 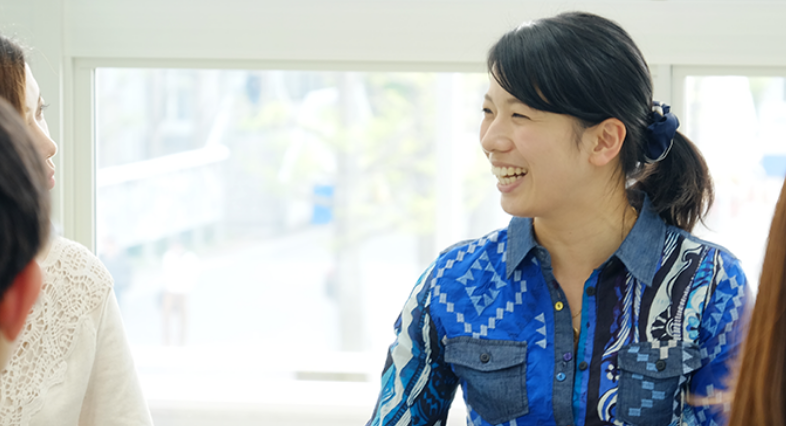 There are people who have committed themselves to passing down their A-bombexperiences to succeeding generations.
What do they think of and try to share?
Ms.Fujisawa, 28, joined the Hiroshima City training program of the A-bomb Legacy Successors from the Kansai area.
We asked her why she joined it and her message to share.

◆A-bomb Legacy Successors training
Because of the ageing of A-bomb survivors, Hiroshima City started the three-year training course of Successors to convey the survivors’ A-bomb experiences and to pray for peace, instead of them.

The reason why she joined the Hiroshima program

First, could you tell us why you applied for the Hiroshima Program?

I learned about this program when I found an article about the first Successor recruitment in the newspaper four years ago.
At that time, I had started to work in Osaka from the previous year. The training sessions of the program were held on weekdays when I was working, so it was difficult to join them. I talked about it to a friend in Hokkaido with whom I had produced exhibitions about the atomic bomb in my college days. She applied for the program and participated from Chitose, Hokkaido to be one of the first Successors.
She told me about the Successors’ second recruitment. I applied for it because I had just quit my job at that time.

You said that you produced A-bomb exhibitions when you were in college. Have you been interested in this matter for a long time?

When I was a college student in Hokkaido, a group of six or seven of us went to the Peace Memorial Museum in Hiroshima. One of the displays struck me, and I started to have an interest in the A-bomb issues.

Which display was it?

It was the school uniform of a girl who died in the A-bombing. The uniform was so small. I was shocked that 14-year- old girls in those days were so small, and one such small girl had disappeared. I had studied history, so I had some knowledge about the A-bombing. However, there was a big gap between the image I vaguely had toward the A-bomb destruction and the impact I received from the uniform just in front of me. So, I thought that we must share what happened in the A-bombing.

Can you describe the “gap” specifically?

I knew the facts, such as how many people died in that year, historical background, scientific effects of radiation and so on. Such information in textbooks was not linked well with our real world in my mind. I was born and grew up in Osaka and had no hibakusha survivors around me, which was quite different from Hiroshima. When I saw the girl’s uniform, I realized that she was an ordinary girl who could have been close to me, and the past and the present were connected in myself.

I see. Then, you had an interest in the A-bomb issues and have been involved in various projects.

Yes, there are some hibakusha in Hokkaido, too. Sapporo has the “No More Hibakusha Kaikan,” an A-bomb museum built by citizens. When I was a college student, I often visited there to hear survivors’ stories and did panel exhibitions in the municipal hall with friends.

After I graduated from college, I came back to Osaka. I couldn’t be involved in any project at that time, but I always remembered the words of the hibakusha in Hokkaido; “I am happy that young people like you have an interest in this issue” and “You are my hope.” I thought that just hearing their experiences was not enough, and that I had to do something. Then, I heard about the second recruitment of the A-bomb Legacy Successors and I applied for it without hesitation.

In the program, you heard a lot of survivors’ stories and chose one whose story you want to succeed. Who did you choose?

I chose Ms. Teramae, who was A-bombed within 1km from the hypocenter. When she told her story,she sang a song which she had sung in her childhood. It was a song to encourage soldiers. She said that singing songs was the only pleasure in her childhood. Although it was very sad that the song a girl was singing as a pleasure was a war song, I was impressed by her beautiful voice and that she looked happy when she sang. So, I chose her.

In addition to presenting the facts, what would you like to show in her story?

I would like to share her character and her personal feelings as a female. Recently, I often think why this program started in which Successors tell stories orally. There are a lot of image materials and books. If you want to hear the stories, you have the media. Why do we have people who share the stories by speaking them? I have not gotten a clear answer yet, but I think it is important to tell the stories so that listeners can think about them vicariously. I haven’t experienced war, so I can talk about the atomic bombing with the same viewpoint as young people, which I think is significant.

Do you mean that you are interpreting the stories in your own way, using words which are familiar to young people?

Yes, the words spoken by a person of the same generation are realistic. As the person has a similar sensibility, we can have the same viewpoint. I think that if the person was from a different generation, we might not share the same view because we have different backgrounds. If only the images were passed down, it might be difficult to get empathy from them because they were recorded in different times. I think that by using the words in each period and passing down the stories from generation to generation, the stories will develop and get empathy from next generations. That is my answer at present.

Her experience at shops in Hiroshima

It is important to gain empathy in order to pass the stories down, isn’t it?

In Hiroshima, I often go for a drink with other members of the program. To my surprise, shop masters and other guests often join our conversation when we talk about the sessions that day.
They say, “Although I was born and grew up in Hiroshima, I haven’t had an interest in the A-bombing.” “Actually my opinion is…” “We ourselves have to pass down the survivors’ experiences. We are sorry that you have come all the way here.” I am amazed that everyone talks a lot about it.

One day, after we left a bar, the master ran to us and said, “I couldn’t say anything because I was in the shop, but what you are doing is very important. I have hesitated, but I think I have to do something now.”
Many people in Hiroshima have grandparents who experienced the A-bombing. Those people may usually refrain from talking about it and avoid the topic, but I believe they have their own thoughts.

As the survivors are getting old, they also want to hand down the survivors’ experiences now. I think young people of Hiroshima should send out more messages, not avoiding talking about the A-bombing.

Message she wants to convey

What kind of people would you like to talk to as a Successor?

In the Hiroshima Project, when we have a request, we go to elementary, junior and senior high schools, colleges and so on and give a presentation. Personally, I also would like to talk to people in their 20- and 30s, closer to my age.

Is that because you want to share the survivor’s experience using your own words to pass them down to people in your generation?

Yes, I am thinking how I should tell the story to move their feelings. I think that it is important to start by talking about why I, who am not a survivor, joined this program, not by starting with the war or survivor’s stories.

I hope we will have more young people like you.
Thank you very much.