Interviews with
HIROSHIMA memory keepers Pass down a storyVol. 12 2018.7.16 up

Listen sincerely to survivors and think about what you can do for yourself.
To think about your future is the duty of young people living in the victim country of the atomic bombs. 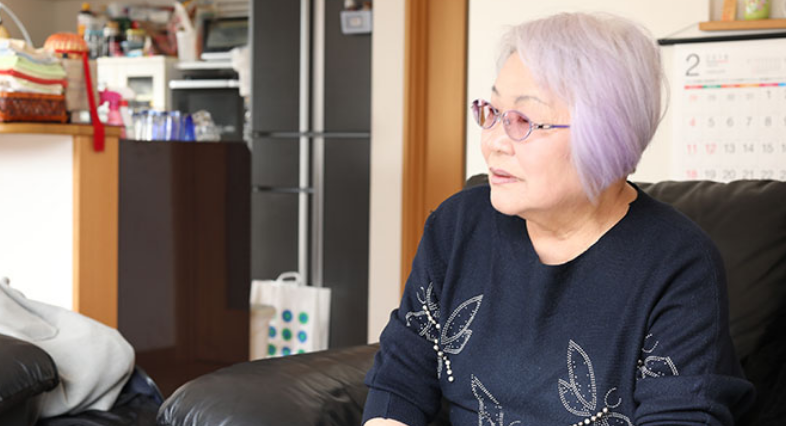 What do people handing down the experience of the A-bombing think and try to convey?
Hisako Kimura was exposed to the A-bombing in Osuga-cho, located 1.6km from the hypocenter. She is now 81 and serves as executive director of the Miyagi Prefecture Society of A-bomb Sufferers. We asked her what made her tell her A-bomb experience and what she wants to convey.

What made her tell her A-bomb experience

The Hiroshima-3rd Generation Exhibition will take place in Sendai this year. When we wanted to interview a survivor living in Sendai, a man working in the newspaper company introduced us to you. You were born in Hiroshima, and now you are living in Sendai.When did you come to live here?

You serve as an executive director of the Miyagi Prefecture Society of A-bomb Sufferers.Please tell us what made you begin activities for abolishing nuclear weapons.

It was because of the bitterness that my life was changed so much by the A-bomb and by my father, who was killed by the A-bomb, saying at his last moment, “I don’t want to die, leaving you.”
I also want to protect my children and grandchildren from nuclear war.I’m working on this activity now, thinking that I don’t want any other people to have the same painful experience.

How long have you been doing this activity?

About 50 years.
When I was in Tokyo, I began the activity with my mother, and suspended it for eight years while living in Yamagata. In 1978, I came to Sendai and started it again.
The number of people who died as the result of the A-bombs dropped on Hiroshima and Nagasaki was about 210,000. I decided to stop holding onto my bitterness and start appealing against nuclear weapons. I have continued this activity to compensate for other victims’ despair.

How old were you on the day of the A-bombing?

I was eight years old. My house was in Horikawa-cho, downtown Hiroshima. It was located 0.7km from the hypocenter.Before the war, my father practiced medicine.
Before August 6, 1945, we were a wealthy family. We had two maidservants and a rickshaw-puller in our home. We also owned a Datsun car. After the A-bombing, our happy life changed completely.

How many family members did you have?

Six members, including my father, my mother, my three brothers and me.
Except for my father, all of our family are A-bomb survivors.

Where were you exposed to the A-bombing?

I was exposed to the A-bomb in Osuga-cho, 1.6km from the hypocenter.
I was in the second house of my mother’s family with my grandfather’s family.

Please tell us about August 6.

I have no memory of the time the A-bomb was dropped. I found myself sitting in a daze, pulled out of the debris from the collapsed house. I was surprised at the strange darkness like at night and the smell, not expressible in words.

My grandfather, who was outside of the house at the time of the A-bombing, was groaning with burns all over his body, and his skin was peeled off.
I felt horrified at his figure, and I was at a loss not knowing what had happened.

We escaped to Onomichi, my mother’s hometown, with my uncles, carrying my injured grandfather with us.
My mother walked around the city looking for Father and finally found him on the morning of August 9, three days after the bombing. I heard that he looked like a red demon because of burns on his whole body and his swollen face.

He was exposed to the A-bomb near our house on his way to a patient’s home with a nurse. The nurse, who was with him at that time, was blown away by the blast and has never been found. He took his last breath on the night of the 9th. His last words were, “I don’t want to die, leaving you. Please take good care of our children!” He died at the age of 41.My mother was 33.

My injured grandfather was lying in the room with the family Buddhist altar, groaning, “Hot! Hot!” All of our family took care of him. I nursed him for a week, but the smell was unbearable. Even though he was my grandfather, I even thought, “Why must we do this? I wish you were dead.”

My mother lost her husband three days after the bombing and her father, who had been kind to me, on August 12. I think that my mother had a hard time.

Did you have any effect of radiation after exposure?

I am a happy survivor when I think that I have been able to live to be 81 years old.I have had surgical operations seven times, including operations for womb cancer, cataracts and osteoporosis for both legs.I’m not sure if my disease was due to the A-bomb, but what I can blame the A-bomb for is that it changed my life.

The Great East Japan Earthquake and the A-bombing

Mrs. Kimura is not only an A-bomb survivor but also experienced the Great East Japan Earthquake. My grandmother in Hiroshima told me that she recalled the A-bombing when she was watching the disaster on TV. How do you compare the two experiences?

On the day of the earthquake disaster, I was in a recycle store where kimonos are remade into dresses. It was an old building so it shook a lot.
People around me were so upset, but I was calmly seated on a chair, thinking that we should accept death when it comes. Probably, my A-bomb experience gave me nerves of steel.

Soon after, in my position as an executive director of the Miyagi Prefecture Society of A-bomb Sufferers, I worked to confirm the A-bomb survivors’ safety.Looking at the chaotic state of the town, I thought, “This might be the same as the A-bombing.” However, soon I felt otherwise, “No. It is different from the A-bombing.”

What did you think was the difference?

I thought a natural disaster would be different from a human disaster.

The other difference is the process of restoration. We, the A-bomb survivors, were forced to restore our lives without enough backing or support while living hard lives for 12 years until the A-bomb Survivors Medial Care Law was enacted. When a disaster happens now, you can get assistance and support from home and abroad, which I think is a big difference.

What do you think young people can do as an action for peace?

First, they should go to Hiroshima and Nagasaki.I’d like to ask them to feel for themselves what they cannot know without standing at the place.I want them to listen sincerely to survivors and think about what they can do for themselves.
To think about their future is the duty of the young people living in the victim country of the atomic bombs. We survivors have difficulties telling our experiences.

I’m so inspired. Finally, would you tell me what you would like to pass on as you tell your A-bomb experience?

I’d like to pass on the thoughts that nuclear weapons are absolute evil. No more nuclear weapons! No more hibakusha! We don’t want the next generations to have the same experience as we did.

Once a month, we survivors are making an international signature collection campaign in the street to call for the abolition of nuclear weapons.
We ask young people to sign, but they often answer, “I can’t do it until I ask my father or mother if it is OK.”
We say to them, “Please do it, thinking for yourself.” But they answer, “I’m not sure till I ask my parents.”

I think that it can’t be helped as the times have changed, but at the same time, I wonder, “What would we do if a nuclear weapon were dropped on Japan again?”

I don’t have a clear to how I can convey our war experiences to young people. However, when I meet people like you who are trying to convey our survivors’ spirit, I feel like doing my best to continue our efforts.
It is said that these days we can live to 100. So, I have only 20 years left. I don’t know how long I can continue this activity, but I’d like to keep raising my voice as long as I live.