Interviews with
HIROSHIMA memory keepers Succeed to historyVol. 12 2018.5.19 up

I wanted to use my own words to pass down what had happened in Hiroshima at the A-bombing to children who will bear the burden of the future. 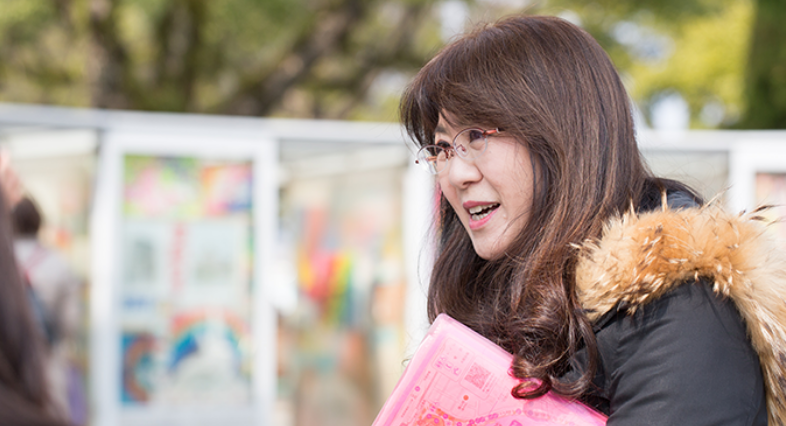 There are people who have committed themselves to passing down the A-bomb survivors’ experiences to the next generation. What do they think about and try to share?
Hiroko Nishimura, 60, has been guiding in the Peace Memorial Museum and in Peace Memorial Park as a peace volunteer, and is a director of the group, “Learning from Floyd Schmoe,” which has been passing down the contributions American pacifist Floyd Schmoe made to Hiroshima by building houses for A-bomb survivors in Hiroshima.

The cause of my becoming a peace volunteer.

Thank you for guiding us in Peace Memorial Park earlier.
Thanks to the thorough explanation you gave us at each monument, we have learned a lot about who and what those monuments are dedicated to.
When did you become a peace volunteer?

It has been 17 years since then. What motivated you to apply to be a peace volunteer?

In short, I wanted to use my own words to pass down what had happened in Hiroshima at the A-bombing, to children including my daughter, who will bear the burden of the future.

Were you interested in peace activities like what you are doing now before you applied to be a peace volunteer?

No, I wasn't. I was born and raised in Hiroshima and had peace education from a very young age, so I thought that I had learned about the A-bombing on Hiroshima.
I lived near Peace Memorial Park and took a walk there almost every day, but I never visited the Peace Memorial Museum.

What prompted you to be concerned with peace activities?

I moved to Kanagawa Prefecture due to my husband's work when my daughter was a first-grade pupil of elementary school.
When I came back to Hiroshima temporarily with my daughter, she asked me some questions in Peace Park, and I found myself unable to answer her questions properly. I think that was the big reason to become involved.

What questions did she ask you?

Looking at Cenotaph for the A-bomb Victims, she asked, "What is that? Why are those people praying there?" Looking at Children's Peace Monument, she asked, "What is this monument?" She asked me questions one after another.
It might have been all right to give her simple answers, such as, "They are praying for peace," and "It is the Children's Peace Monument." However, I was lost for words because I realized that I couldn't answer her questions in my own words.
Immediately after that, I went to a bookstore with my daughter to buy a picture book about the A-bombing on Hiroshima, and we read the book together.

You mean, realizing that you couldn't tell what you know about the A-bombing on Hiroshima in your own words led you to apply to be a peace volunteer.

Yes. After living in Kanagawa Prefecture for five years, I came back to Hiroshima with my family.
My daughter, concerned about peace education, which she had never had at school in the Kanto area, had opportunities to fold paper cranes and to visit the Museum with her friends.

When I saw a leaflet recruiting Hiroshima Peace Volunteers, I responded to it immediately.
However, just after I started filling in the application form, I had to stop writing at the first cont-ttl-q. The cont-ttl-q was "What are you good at?"
I wished that I had special skills such as speaking English or using sign language. I realized that I had no specialties to mention. Then, I decided to write honestly about how I felt when I realized that I wasn't able to answer my daughter's questions at that time.

What made me first apply to be a peace volunteer was my wanting to find my own words to tell about the A-bombing to my daughter. Second, when I saw my daughter and her friends playing together, I thought that all those children, not only my daughter, were my own precious children, who were going to build the future world.
I think these thoughts moved me to apply.

About the Hiroshima Peace Volunteers

Were there any changes within yourself after you joined the Hiroshima Peace Volunteers? If any, would you tell us about them?

Well, I think there was. I have developed awareness of issues which I wasn't concerned about before. At our family dinner table, we naturally talked about things like, "There was a nuclear test today." I think that was a big change to me and my family.

Do you have any difficulties in talking about something that was not your experience?

Yes, I do. For six months after I became a Hiroshima Peace Volunteer, I learned the facts of the A-bombing, listened to the A-bomb survivors' stories and had study meetings with other peace volunteers with the same motivation.

One day a survivor said, "However earnestly you listen to me, you cannot exactly understand what I am talking about, because it is my experience, not yours." I asked myself whether I was qualified to talk about the A-bombing only with indirect, secondhand knowledge. Although I thought she was not critical of us but was just giving her honest feelings, her words pierced my heart.

However, thanks to the other volunteer friends' positive words, such as, "The important thing is not to give up. Let's move ahead steadily together!" Another survivor encouraged me, "We A-bomb survivors will all be gone sometime or other. I am more than grateful for your taking over our experiences, which you haven't experienced, and passing them down to people. I have been greatly encouraged by your activities," I came to feel positive gradually.

About the group "Learning from Floyd Schmoe"

You are the director of the group, "Learning from Floyd Schmoe," which passes down the contributions Floyd Schmoe, an American pacifist, made to Hiroshima, as well as serving as a Hiroshima Peace Volunteer. Would you tell us about the group?

Our group, "Learning from Floyd Schmoe," collects literature and documents of historical facts about Dr. Schmoe for following generations. Now we have six members.

Floyd Schmoe was living in Seattle, when he heard the news of the A-bombing on Hiroshima. With a feeling of apology as an American, he came to Hiroshima to build Houses for Hiroshima for the A-bomb survivors every summer from 1949 to 1953.

There is a picture book about him, isn't there? I can imagine that he must have needed great courage to come to Hiroshima as an American soon after the A-bombing.

I guess so. Floyd Schmoe said, "The moment the A-bomb was dropped on Hiroshima, I was 6,000 miles away. My body wasn't hurt at all, without even a scratch. But I felt as if the bomb had been dropped on me." He came to Hiroshima together with his friends, who responded to his invitation to his housing project, carrying more than $4,000 contributed by many American people.

Some students from Tokyo and some people from Hiroshima joined the project as volunteers. So, people beyond age, sex, status, nations, races and religion joined forces to build houses.
Projects like his, which was carried out with humanity, grow mutual understanding although there are many other recovery supporting projects. I still remember the time when I felt so moved to know about Floyd Schmoe and thought that mutual understanding might lead us to world peace.

Are there any of the houses Floyd Schmoe built remaining in Hiroshima?

Yes, there is one house remaining. Floyd Schmoe and his volunteers built 20 houses and one Community House in three districts—Minami-machi, Eba and Ushita. You can see the Community House built in Eba, which is now called the "Schmoe House."

The houses built in Minami-machi were going to be named "Schmoe Houses," but he was embarrassed and didn't agree to it, saying, "I don't want my name used." So, at the presentation ceremony, the houses were named "Minami Peace Houses."
Building houses wasn't his first and foremost purpose. Floyd Schmoe just wanted to express his apology in some way. People joining forces to build houses grew mutual understanding in the process of accomplishing the project, which was the starting point of his peacebuilding. I suppose he first wondered which way was better—to send relief goods to Hiroshima or to build houses. He chose to build houses in Hiroshima, I think, because he believed that houses were the place where people would be able to be healed and to foster hopes living their daily living there.

In spite of having no A-bomb experience, Floyd Schmoe thought of survivors and sensed their pain as his own. He realized what he had thought by building houses, which has become a big inspiration for me.

Messages to pass on to the younger generation

Thank you very much. Finally, would you tell us any messages you would like to pass on to the younger generation through your activities?

Let me quote Floyd Schmoe's words again. He said, "War does not trouble nations or cities, but just troubles people." It is people who are damaged and affected the most. And it is also people who are able to heal those people. He also said, "Peace is not done by saying but by doing." In fact, following his own words, he showed his apology for the U.S.'s dropping the A-bomb by his efforts to build houses.
I would like young people to have a courage to do rather than to say. As a matter of course, before taking action, you should learn history, visit the exact place to see what happened there and listen to people there.
I am sure once you understand with your heart what happened in the past and take action thinking of the victims, your activities will be powerful. Even if you might not understand victims' bitterness fully at first, you can ask yourself what to do after starting your activity. By overcoming many differences among people and deepening mutual understanding, we can have peace in the world.